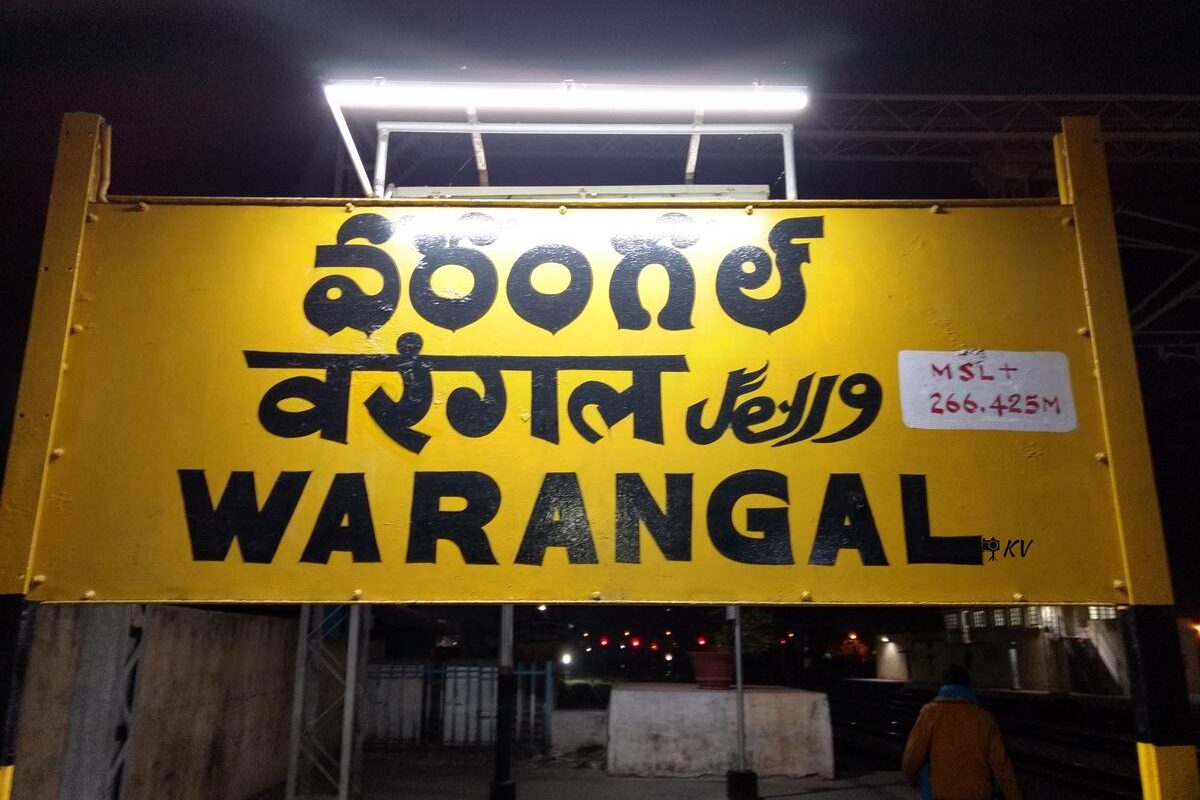 Warangal is a town in Telangana, southern Indian state. From the 12th to the 14th centuries it was the capital of the Kakatiya dynasty and still exist many complexly graced monuments from this period. The remains of the Warangal fort from the 13th century and the Thousand Pillar Temple, which were founded in 1163, are among them. Situated on a lake, the Temple dedicated to the Hindu goddess Kali dates from the 7th century.

HOW TO REACH WARANGAL

By Air. Rajiv Gandhi International Airport, Hyderabad, is the nearest airport. Hyderabad is 160 km from Warangal and is the closest airport.

By Train. Warangal is well connected by rail with India’s major cities.

Warangal city is part of Telangana state. Warangal has a rich history and tradition, and it has been awarded as the best heritage city in 2014. Warangal was historically known as Orugallu and during the 11th century was the seat of the Kakatiya dynasty. The heritage site of Warangal has been selected to be protected by the Indian government under the HRIDAY programme, with many outstanding pieces in Kakatiya style of art and architecture. There are three temples in the city: the Warangal Fort, the Temple of Ramappa and the Temple of the Thousand Pillar that are listed as UNESCO World Heritage sites.

Top Temples To Visit In Warangal

A hill next to Bhadrakali Lake, one of the most important temples in Warangal, is the Bhadrakali Temple. The square pillars of the Bhadrakali Temple mark the triumph of the Chalukya dynasty over the Kakatiya as a major variation from the round pillars of Kakatiya temple Architecture. Constructed in 625 AD, the eight-armed stone idol of Goddess Bhadrakali, with delightful eyes and a sword in each hand, is a special feature of this temple.

It is closely linked to the prominent Koh-i-Noor diamond, which is thought to be part of the left eye of the idol of Bhadrakali. The lion, stands opposite the sanctum sanctorum, Bhadrakali’s svahana (consort). The temple complex houses a large dwajasthambam (flagstaff) and a Bali-peetam (animal sacrificial pedestal). Next to the Bhadrakali Lake is creating India’s largest and first cultural geographically diverse park.

On the steps of the Narasimha Temple, located on a hill, there will be a walk through the thick woods of Hemachala. A wall, which is unique in many respects, is the Narasimha idol. It is considered to be the last ever standing Narasimha idol. The idol’s chest is smooth like human flesh. When the skin is rubbed, reflections of the finger are evident. In truth, according to religion, it is that the good-will goddess Lakshmi also resides in the chest of the idol.

The idol navel (boddu) secretes most strangely a fluid that is called ‘cheemu’ in Tamil and is circulated as a prasad to devoted people. ChintamaniJalapatham, the natural water source, flows nearby and devotees think its waters are medicinal.

The Padmakshi Temple is built on a hillside in the middle of Hanamakonda, surrounded by a picturesque pool. For Jainism, the surrounding region, earlier known as ‘basadi.’ A Jain Temple, which later became a Hindu temple, was one of the most famous temples in Warangal in history. The temple has many lovely Jain Tirthankaras sculptures. The most prominent is the image of the Padmakshi idol on his left in the sanctum sanctorum.

Padmakshi idol changes shape all day long, she’s a morning baby girl, a teenage girl in the middle of the day and an old lady at night. Both the idols have been carved and recently retouched out of living rock. The Annakonda pillar at its entrance is a special characteristic of the temple. The striking pillar is a four-sided column, built of black granite material. The Bathukamma Festival is very festively celebrated, when the lakhs of women come together in the Padmakshi Pond and immerse themselves in their flowers.

Palakurthi was named after the famous poet Palkuriki Somanathudu of the Telugu. This region was an important location for the Shaivism cult, a secular Hindu sect that had existed largely in southern India, and opposed caste and class education for more than 6000 years. The Someswara Laxmi Narasimha Swamy Temple sits on top of a hill in Palakurthi. There are two caves – one devoted to Lord Shiva and Lord Vishnu. There are two caves.

The parikrama of the temple is thus shaped naturally by the route through the nearby hills. The black stone gravings of dwara palika, like the Shiva in nataraj, are seen on both sides of the entrance to the inner hall, holding the famous bark in one hand. A bull from Nandi is the gateway to the temple of Shiva. A temple in the other cave, dedicated by Lakshmi Narasimha Swamy, is devoted to God Vishnu.

This prestigious Jain Temple, 2000 years old, is situated on Hyderabad-Warangal Highway in the village of Kolanupaka, one of the most famous religious sites. During the Kakatiyas era in Kolanupaka, Jainism flourished and became an important hub for the pilgrimage of the Jains from South India. In the temple are housed idolizations of the three Jain tirthankaras – Rishabhanatha, Neminatha and Mahavira. The Rishabhanatha idol, the first tythankara, is sculpted in blue stone and known as ‘Manikyaswami.’

The tradition says that this image of Manikyaswami was previously adorated by Ravana’s wife, Mandodari. The idol of Mahavir is constructed from a monolithic jade stone and the final tirthankar. The temple is built of red sandstone and white marble and has numerous ancient inscriptions in Jain. Padmavati’s 12 armed idols are separate from the normal four-armed idols.

Madikonda was renowned for its thriving literature in telugu. This region has four ancient temples, also known as Manigiri. The Rama Lingeshwara Swamy Temple, regarded as a striking creation of two rectangular rocks on a hillside with rock cut steps known as mettu gutta in Telugu, is one of their most prominent. There are two temples devoted to Shiva and Rama of God in the complex. The complex is surrounded by several small bodies of water and extensive rock formation. There are also other relics of the Kakatiya empire here. This region is to be built on a spiritual circuit in Warangal.

Established during the Kakatiya dynasty in the 11th century, this temple is exemplary of the art and architecture of Kakatiya. It took the building of the Ramappa Temple 40 years, also called the Ramalingeswara Temple. This is possibly the only temple in India named after its craftsman, designed by a sculptor named Ramappa. It is one of the most prominent temples in Warangal, situated in the village of Palampet. This Siva Temple is chaired by Ramalingeswara.

Designed with red sandstone, the key complex. The Shiva lingam, constructed from black basalt, sits in the middle of the sanctorum from a raised footstool, the Yoni-Petha. There are great brackets of black basalt in the exterior columns that are carved in the form of imaginary beasts, female dancers and musicians. The temple roof is so light that it can swim over water. It is built of bricks. Both sides of the main temple are surrounded by two little shrines devoted to God Shiva. The Shiva Shrine is faced with a huge Nandi ram.

The Thousand Pillars Temple is a masterpiece of architecture, also called the Rudreswara Temple, or the Veyisthambala Gudi locally. This 12-century temple is built under the Kakatiya King Rudra Deva and has an excellent art of Kakatiya. The most striking feature of this architecture of the temple was its 1000 pillars, all of which did not impede the trail. The main building is like a star. The temple has been named Trikutalaya, one with three temples, Lord Surya, Lord Shiva and Lord Vishnu, each one devoted to it.

Sandbox technique demonstrates the excellent skills of Kakatiya handcrafts is used to reinforce the foundations. At the entrance of this Shiva’s shrine sits a large Nandi ram, made from a monolithic black basalt block. On the left side of the sanctum sanctorum lies an idol of Ganesha. There is a wide porch in front of the main temple, the kalyana mandapam.

Sandbox technique demonstrates the excellent skills of Kakatiya handcrafts is used to reinforce the foundations. At the entrance of this Shiva’s shrine sits a large Nandi ram, made from a monolithic black basalt block. On the left side of the sanctum sanctorum lies an idol of Ganesha. There is a wide porch in front of the main temple, the kalyana mandapam.

This complex consists of many majestic mandapams, such as the splendid porch of Sabhamandapa. The legendary characteristics like the Gaja Kesari reveal an architectural wondrous sculpture of salabanjikas (female dancers).

There are many famous temples in the tiny village of Govindarajula Gutta. Of special interest are a small temple on top of a gutta or hillock. The fans of the Govindarajula Gutta Temple must take a flight of nearly one hundred steps, devoted to Lord Ram. At the foot of the hillock, Lord Hanuman, a little temple devoted to Ram’s devotee. Next to the temple stands a huge ratha (carried by important stones). It is assumed that the Hazaris of Warangal constructed the chariot. The temple is host to big worshippers meetings during the festival of Rama Navami.

It was once one of the most important religious sites for Kakatiya rule, the ancient 846 years old Temple constructed under the Kakatiya dynasty. This temple is located inside the famed Warangal Fort, and devoted to the Lord Shiva, worshipped in the form of a swayambhu. In the middle of the fortification lay remains of the temple with four stand-alone “entry gates” 33 feet long, displaying beautiful flowers, lotus buds, legendary beasts, looped girls and birds.

The complex sculptures on walls and ceilings, as those of Perini dansers, offer a detailed understanding of Kakatiya’s history and customs. The complex had originally 23 shrines, but most of them were plundered, with precious gems embedded.

This temple, located near Hanamkonda, has a Chalukian architectural theme, which dates back 3 centuries AD. It’s one of the few Pashimadwara Mukha temples (entry gate facing west) in India, surrounded by hills next to the water body. The temple has complex statues and paintings. The temple is worshipped in a lingam style to the Lord Shiva. The Maha Shivaratri festival is celebrated with pomp as flowers and lights decorate the whole complex.

The several monuments designed by Kakatiyas won Warangal a prominent reputation for art and architecture and led him to a famous tourist destination, including fortified towns, lakes and stone gates. The Kazipet Dargah, Urss Gutta, Erragattu Gutta, Waddepally Lake, Lake Dharmasagar, Ekashila Lake and Garden, Lacknavaran Cheruvi, Musical Garden, Kakatiya Zoological Park, Kush Mahal and the Regional Science Center are some of Warangal’s other famous attractions. Warangal was also selected as a “intelligent city” under the mission of intelligent cities. Warangal provides a touch of new and old to those interested in exploring the city.