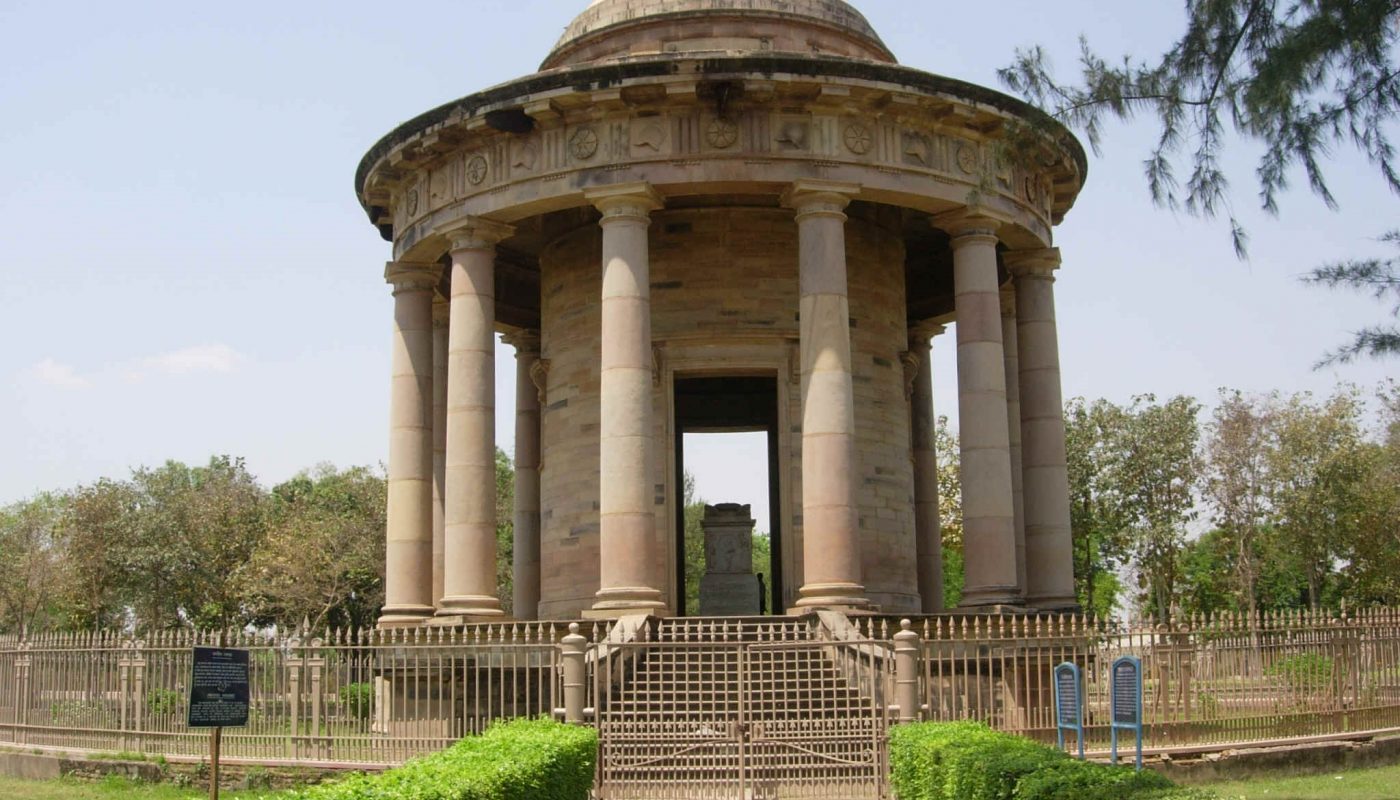 On Varanasi Gorakhpur National Highway 29, Ghazipur is located at Lt. 25 35′ N and Long. 83 35′′ E. Ghazipur’s history can be traced back to Sayid Masood’s customary establishment in 1330. Gadhipur was the city’s old name, according to folklore. The city’s mound, which could be an old clinic, is supposed to be the location of an ancient mud fort known as Fort of Raja Gadhi. The Cornwallis monument, where the Governor General of India is buried, is located in the city’s south end. It’s a big building with a domed ceiling and twelve Doric columns supporting it. The floor is four metres above ground level and made of grey marble.

A white marble cenotaph stands in the centre, with a medallion bust of Cornawallis on the south side. Pahar Khan’s tank is located in the heart of the city, next to the road. The Chihul Satun, or hall of 40 pillars, is the location where Abdullah Khan is buried in the Nawab-ki-Chahar-diwari garden. The palace’s gateway is beautiful, but the dwelling itself is run-down. A road leaves the main street on the left and heads north-east, past the Jami Masjid, just across from the chihal Satun. A Math dedicated to Pauhari Baba, a prominent saint of the time, is located 10 kilometres from the city.

Because Ghazipur is located on the Ganges River, there are several lovely ghats, including Mahadeva Ghat, Dadri Ghat, Collector Ghat, Massol Ghat, Chitnath Ghat, and Posta Ghat. ChitNath is the most senior of the group.

Best Places to Visit in Ghazipur

Aunrihar is located in latitude 25° 32′ N and longitude 83° 11′ E on the main road leading from Varanasi to Kushinagar on NH 29, about 42 kilometres west of Ghazipur city and 3.2 kilometres from Saidpur. This location is archaeologically significant. One of the oldest and most important sites in the district is a ring of mounds that stretches from Saidpur to Aunrihar. The entire surface of the earth in Aunrihar is strewn with shards, massive carved stones, and fine pieces of sculpture that are used as common building stone. Every few yards, vestiges of a stone wall can be seen.

The town is located on the Saryu River’s bank. It is around 35 kilometres from Ghazipur. Sheikh Abdullah, Governor of Ghazipur, is reported to have founded the town in 1742 AD, and he also erected a massive fort here. On the occasion of Ram Navami, a small fair is conducted here.

Bhitari is located around 32 kilometres from Ghazipur, near the town of Saidpur. The name Bhitari is derived from the name Bhimutri. The Bhitari is a significant archaeological site. It is a site of immense antiquity and has many archaeologically significant remnants. It is likely that Bhitari was once in the hands of Buddhists, although it most likely reached its peak during the Gupta era. The most visible artefact of the epoch is the iconic red sandstone monolith that stands in the fort enclosure on the block of ruff stone. It bears a meter-high bell-shaped capital, similar to those found on Akhoka pillars. It bears an inscription related to Skanda Gupta’s reign and his successor to Kumar Gupta.

The latter name appears on numerous huge bricks uncovered at the foot of the pillar in 1885, when an oval silver plate inscribed with Kumar Gupta’s name was discovered in the neighbouring ruins. Aside from the pillar, the most precious finds were a seal and coins depicting the genealogy of nine generations of Gupta kings. The Bhitari was most likely one of the royal mansions and a symbol of the Gupta Kings’ authority in the area.

Virpur is located on the banks of the Ganga, approximately 35 kilometres from Ghazipur. Tikam Deo, a great Cheru Raja, made it his capital. Old coins and sculpture pieces have been discovered in Cheru Raja’s fort.

Dildarnaar is located on the road from Varanasi and Zamania to Buxar, and it is 20 kilometres from Ghazipur. Between the town and the station lies a hill known as Akhandha, which is claimed to have been Raja Nal’s seat, and the enormous tank to the west is known as Rani Sagar, after his legendary queen Damayanti. The remnants of two temples may be found in the mound’s centre.

Gauspur, a major village, located 14 kilometres from Ghazipur. The previous Jamidars of the area were Bhumihar, who claimed ancestry from those who cured Raja Mandhata of his leprosy and so got a land grant. The tank in which the Raja bathed is still visible on the village’s eastern outskirts, and it has long been a destination for those suffering from similar ailments. The Raja’s fort was located in Kathot, a nearby village to the east. Traces of a Hindu civilisation may be seen in both Ghauspur and Kathot; vast quantities of stone and old bricks have been excavated, and some spectacular pieces of Hindu artwork can be found in the temple. Oldham attributed these to Buddhism and linked the location to the “monastery of unpierced ears” mentioned by Chinese travellers Hiuen Tsang and Fa Hien.

Saipur town is located on NH 29, around 30 kilometres from Ghazipur. There are two Muslim dargahs in town, one of which is a modest domed structure supported by a square pillar. Other structures are larger and more notable, with a vast stone roof. These urban structures could be Chaiyas connected to Buddhist monasteries. One is the tomb of Sheikh Samman, who died in 1595, while the other is that of Makhdoom Shah.

It is an old, high bank of the Ganga about 16 kilometres south of Ghazipur. Ali Quli Khan, governor of Jaunpur, built the town in 1560 and named it Khan Zaman after his status. According to Hindu legend, the name Jamadagnia was derived from Rishi Jamadagni. Lathiya pillar is located 3 kilometres southeast of town and is a circular monolith of polished sandstone 50cm in diameter and 6mt in height. There is a bell-shaped capital with a group of eight lions looking outwards above it.

November is the busiest month for tourism in Ghazipur, India, followed by September and April.

How to Reach Ghazipur

Varanasi is the closest airport to Ghazipur. Ghazipur is roughly 70 kilometres from Varanasi (Babatpur) Airport. The airport is well connected to both domestic and international destinations via a variety of aircraft operated by both commercial and public airlines.

Ghazipur station is well connected to other cities in Uttar Pradesh and India, including New Delhi, Mumbai, Kolkata, Agra, Lucknow, Varanasi, Allahabad, Bihar, Jammu & Kashmir, Ballia, and so on.

By road, Ghazipur is well connected to the rest of Uttar Pradesh. The nearest major terminal is Varanasi, which is 76 kilometres distant. Lucknow, Gorakhpur, Mau, Ballia, Varanasi, Jaunpur, Kanpur, Azamgarh, Allahabad, Agra, and Mathura are all well-connected by bus from Ghazipur. These buses are operated by both the Uttar Pradesh State Road Transport Corporation and private companies.