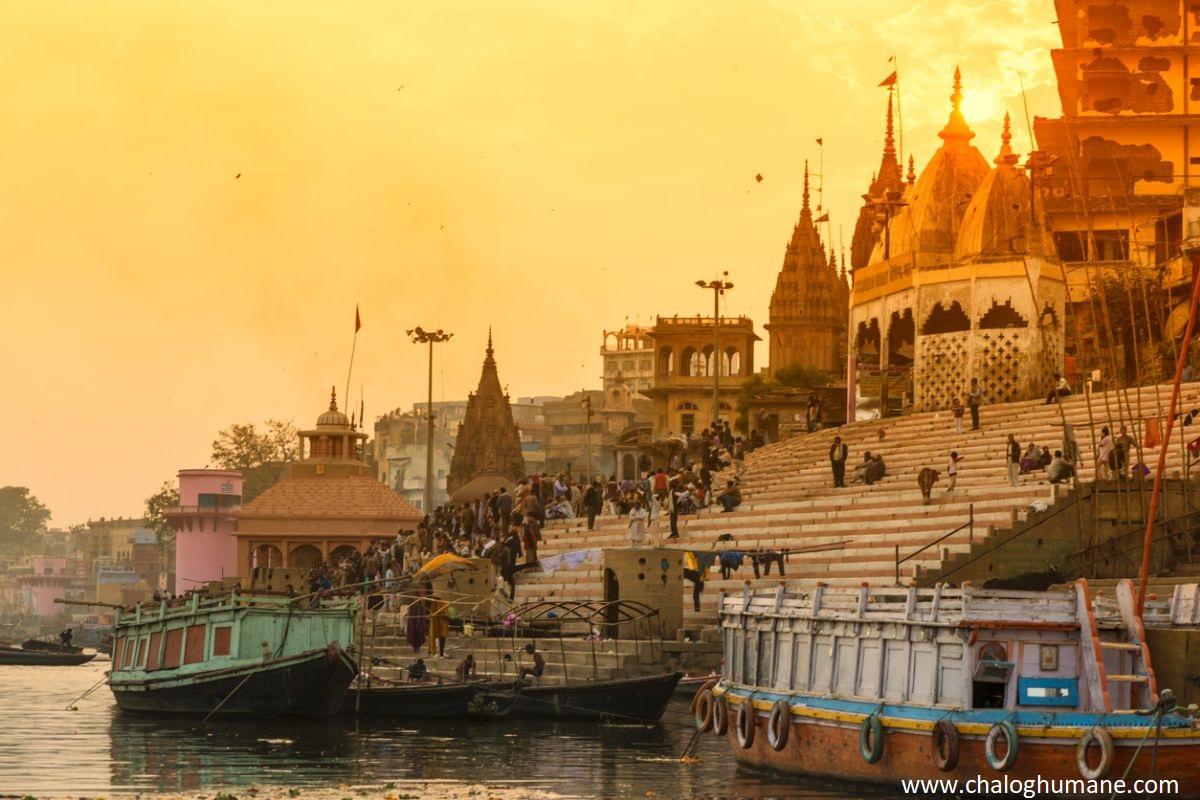 Varanasi is a city in Uttar Pradesh, India, that dates back to the 11th century B.C. The city, known as India’s spiritual capital, attracts Hindu pilgrims who bathe in the sacred waters of the Ganges River and perform burial rites. Some 2,000 temples dot the city’s meandering lanes, including Kashi Vishwanath, the “Golden Temple,” devoted to the Hindu god Shiva.

Best Places to Visit in Varanasi

Sarnath is a town in Uttar Pradesh, India, 10 kilometres north of Varanasi, near the confluence of the Ganges and the Varuna rivers. The Buddhist Sangha was founded in Sarnath’s deer park, where Gautama Buddha first preached the Dhamma and where Kondanna attained enlightenment.

Varanasi’s ghats are riverfront steps that lead to the Ganges’ banks. There are 88 ghats in the city. The majority of the ghats are bathing and puja ritual ghats, with two ghats dedicated only to cremation. When Varanasi became part of the Maratha Empire in 1700 AD, most of the city’s ghats were restored. Marathas, Shindes (Scindias), Holkars, Bhonsles, and Peshwes are the patrons of today’s ghats (Peshwas). Many ghats have legends or mythologies attached to them, and many ghats are privately held. A famous visitor attraction is a morning boat trip on the Ganges through the ghats.

It is devoted to Lord Shiva, the city’s patron deity, and is also known as the Golden Temple. Varanasi is said to be the location where the first jyotirlinga, a fiery pillar of light that displayed shiva’s superiority over other gods, pierced the Earth’s crust and flared towards the heavens. More than the Gaths or perhaps the Ganga, Varanasi’s spiritual emphasis is the Shivalinga housed in the temple.

The Kashi Vishvanath Temple is a well-known Hindu temple devoted to Lord Shiva. Varanasi, Uttar Pradesh, India is the location. The temple is one of the twelve Jyotirlingas, the holiest of Shivatemples, and is located on the western bank of the holy river Ganga. The major deity is known as Vishvanatha or Vishveshvara, which means Universe Ruler. Because Varanasi is also known as Kashi, the shrine is also known as Kashi Vishvanath Temple.

A beautiful temple dedicated to Devi Annapurna, the “Goddess of Fooding,” is located near the Kashi Vishwanath temple.

A significant temple dedicated to Devi Sankatha, the “Goddess of Remedy,” is located near the Sindhia Ghat. There is a colossal lion statue on the site. This temple is also surrounded by nine temples dedicated to nine different planets.

It is Varanasi’s ancient temple, VishesharGanj, located near the Head Post Office. No one can stay in Kashi without the permission of God KalBhairav, who is known as the “Kotwal of Varanasi.”

This Lord Shiva temple is located on the Daranagar-Kalbhairav temple route. Just outside this temple is a religiously significant Well, whose water is supposed to be a blend of various underground streams and beneficial for curing a variety of ailments.

A modern place of worship designed by Pandit Malviya and built by the Birlas, located on the campus of Banaras Hindu University. Everyone is welcome, regardless of caste or creed.

This modern temple dedicated to Lord Rama was built by a Varanasi family. It is here where Tulisdas, a great mediaeval seer, resided and composed the epic “Shri Ramcharitmanas,” which tells the life of Lord Rama, the Ramayana’s hero. On the walls are inscriptions from Tulidas’ epic. It is only a short distance from the Durga Temple.

It was created in the 18th century and is known as the “Monkey Temple.” Despite the fact that it is one of the most well-known temples. The temple has beautiful stonework, and it is a good example of NAGRA Shilp. DURGA, the Goddess of Strength and Power, is thought to rule the entire planet. Durgakund, a pond close to the temple, is named after the Hindu god Durga.

Mahatma Gandhi dedicated this temple in 1936, and it features a flawless relief map of India made out of marble.

The winter months are ideal for visiting Varanasi (November to February). Although it can get quite cold in the winter, this is the best time to explore the holy city without getting tired. The average low temperature is approximately 5°C.

How to Reach Varanasi

Varanasi is easily accessible from anywhere in India. The city is well connected by road, train, and air, providing convenient and comfortable travel to and from other Indian cities.

Several airlines fly at LBS airport in Babatpur, which is 22 kilometres from Varanasi and 30 kilometres from Sarnath. From Babatpur Airport in Varanasi, both domestic and international flights are available. Domestic flights from Varanasi to Delhi, Agra, Khajuraho, Calcutta, Mumbai, Jaipur, Lucknow, Gaya, Chennai, Bengaluru, Ahmadabad, Hyderabad, Bhuvaneshwar, Guwahati, and other cities are available. International flights are accessible to Colombo, Bangkok, Kathmandu, and Sharjah.

Private cabs can be arranged through travel agencies, hotels, and online businesses, among other places. In addition, e-rickshaws, cycle rickshaws, and three-wheelers are frequently accessible. However, one-way traffic is maintained on some routes, particularly in the ancient Varanasi neighbourhoods with temples and markets. Autorikshaws and large vehicles are not authorised on such routes. Tourists should be advised that while hiring private vehicles, cars/taxis/four wheelers are normally charged for 4,8,12 hours or for the entire day, with a kilometre restriction within the city; for 8 hours, the pricing varies between Rs. 1400-2200 for four seated cars. The LBS airport in Babatpur offers prepaid taxi service.

The rate of reserved autorikshaw and rikshaw ranges from Rs.10 /= to Rs. 15/= per Km depending on routes. The tourist are advised to fix-up the fair before travelling.