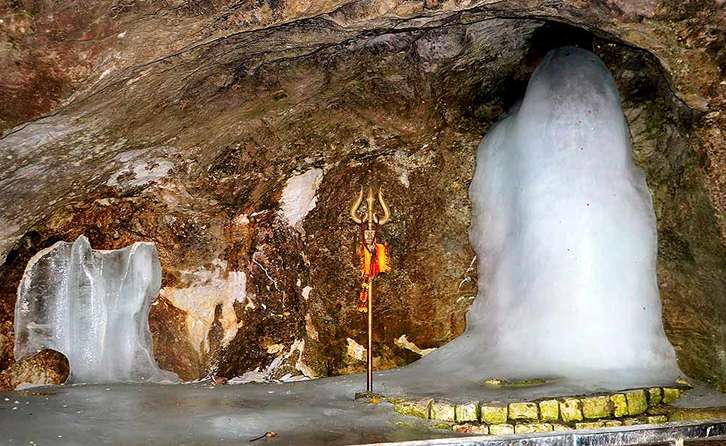 Amarnath, one of the holiest Hindu pilgrimages, is known across the world for the natural creation of Shiva Linga from snow. Only in the months of Shravan, i.e. July and August, is this heavenly Yatra to the holy cave available, as these are the only months when entry to the holy cave is somewhat simple.

Amarnath Temple is a Hindu temple in the Indian state of Jammu & Kashmir. The cave is located at an elevation of 3,888 metres (12,756 feet), about 141 kilometres (88 miles) from Srinagar, Jammu and Kashmir’s summer capital, and may be reached through Pahalgam town.

Amarnath Temple is a Hindu temple in the Indian state of Jammu & Kashmir. The cave is located at an elevation of 3,888 metres (12,756 feet), about 141 kilometres (88 miles) from Srinagar, Jammu and Kashmir’s summer capital, and may be reached through Pahalgam town.

Amarnath Ji, or Amarnath Temple, is a holy temple located around 29 kilometres from Pahalgam at an elevation of 3,888 metres. A Shiva Lingam (a phallus-shaped structure formed of ice) is located inside the cave and is revered by Hindus all over the world. The pilgrimage trip known as Amarnath Yatra, which begins at Chandanwari, attracts a significant number of devotees from June to August. It is regarded one of the 18 Maha Shakti Peethas, or Hinduism’s holiest sanctuaries. Aside from seeking blessings at the Amarnath Temple, the surrounding surroundings are breathtaking.

Lord Shiva is said to have revealed the meaning of life and eternity to his consort and wife, Goddess Parvati, at the site where the Amarnath Cave now sits. According to mythology, Bhrigu Muni, a well-known Hindu scholar, was the first to locate this sacred place. The whole Kashmir Valley was inundated at the time, and Kashyap Muni, another renowned sage, used his supernatural abilities to drain the waters. Bhrigu Muni was the first person to find the Shiva Lingam when the floods receded.

Top Things to Do in Amarnath

Seek the divine blessings at Amarnath TempleEnjoy the sights surrounding you

How to Reach Amarnath Cave?

From Jammu to Pahalgam and Baltal, you can hire a private vehicle; state transportation vehicles are also available. There are two hiking paths to Amarnath Cave: one that takes you through Baltal and the other that takes you through Srinagar. You may also take the Amarnath Yatra by helicopter to bypass the lengthy and arduous hike.

The shorter path begins in Pahalgam’s Chandanwari base and passes through Baltal, Domial, Barari, and Sangam. The trail is 14 kilometres long and may be completed in 1-2 days. You have the option of walking or hiring a palki (a seat carried on the shoulders of people).

The path to Amarnath Cave through Pahalgam is the more difficult one, taking 3-5 days one trip. This path is significantly wider than the Baltal route, and pilgrims may easily travel it. You may also hire horses to accompany you on your journey to the Amarnath Temple.

Amarnath Temple may also be reached via helicopter. Drive up to Baltal after landing in Srinagar and board the helicopter that will take you up to Panchtarni. You may either hike for around 6 kilometres from Panchtarni or arrange a palki/horse ride.

Lord Shiva is one of the most popular Hindu deities, not just among Indians but also among people of other nations. Every year throughout the summer months, millions of devotees journey over the treacherous mountains to Shri Amarnathji Shrine in South Kashmir to pay homage to their adored God, who appears on this planet in the unusual form of an Ice Lingam. The Shri Amarnathji Shrine Board (SASB), which was established by an Act of the Jammu and Kashmir State Legislature in 2000 and is chaired by His Excellency the Governor of Jammu and Kashmir, manages the shrine. establishing a virtual store.

Stay visited to chaloghumane.com for all religious travel information.