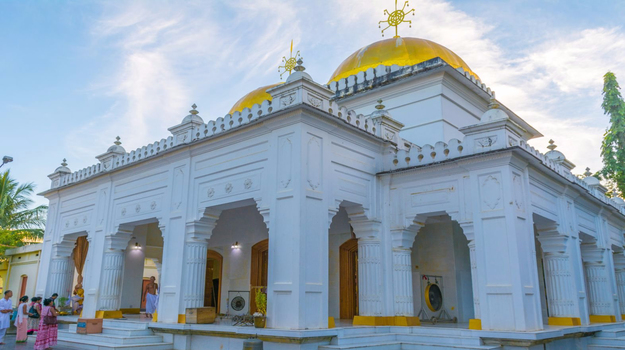 Shree Govindajee Temple is Imphal’s greatest Vaishnava temple, located near to the ancient Manipur Kingdom’s kings’ palace. With two gold-plated domes, a paved court, and a massive, raised mantapa, or congregation hall, the temple is modest in form. The major deity of Govindaji, who is said to be an incarnation of Lord Krishna, and his bride Radha are housed in the garbhagriha’s (sanctum sanctorum) central chamber. On either side of the primary deity, images of Balabhadra and Krishna are deified in the other two chambers of the sanctum, on one side, and images of Jagannath, Subhadra, and Balabhadra on the other. The temple was originally built in 1846 during the reign of Maharaja Nara Singh and rebuilt by Maharaja Chandrakriti in 1876.

According to Article II of the Manipur Merger Agreement of 1949 (when Manipur became a part of India after the latter’s independence), the temple management was previously with the erstwhile king. However, because to popular demand, it is currently overseen by a board of directors comprised of members recruited from the priestly community as well as prominent citizens of the city. The board’s president is the state of Manipur’s chief minister.

The nearest airport is Tulihal airport.

Located at the heart of Imphal