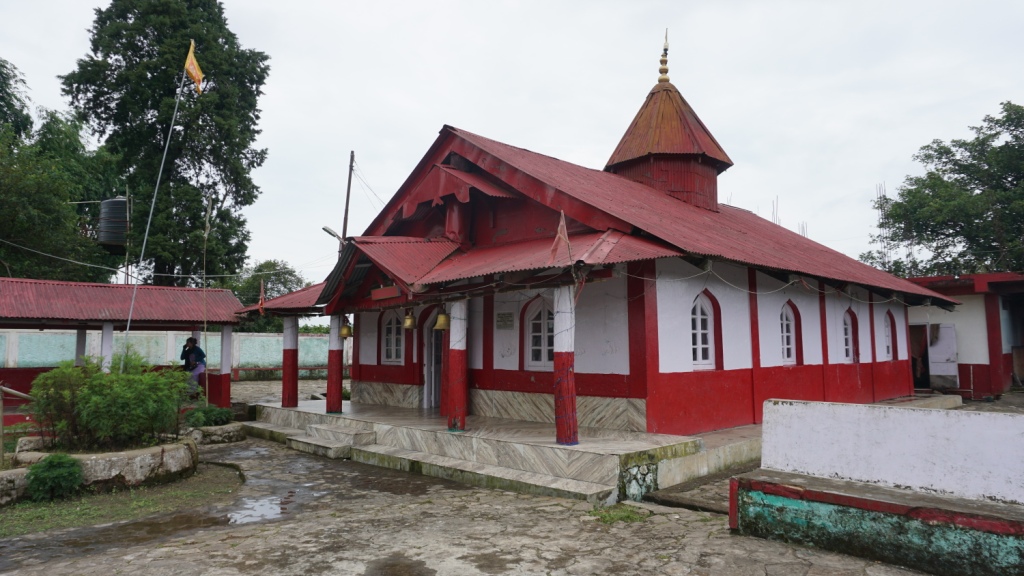 Nartiang, which currently appears to be a sleepy town used to the influx of tourists, was once an important cultural and spiritual centre during the Jaintia kingdom’s heyday. The famous Nartiang Durga Temple is also located here. The Durga temple here was erected on the site of an older one, and when you dig around and learn about the history of the place, intriguing stories emerge. Until the arrival of British control, this was a spot where human sacrifices were made. In actuality, the heads of the sacrificial were rolled down a shaft inside the temple that leads to the neighbouring Myntang river.

The Nartiang Durga temple also houses remnants from the Jaintia kingdoms, such as old antique canons that demonstrate the level of sophistication that these hills’ warriors formerly possessed. The garden of monoliths, which is next to the temple, is another fascinating site. These massive stone blocks were placed as monuments to former kings and provide an eerie picture. You can roam around the garden on the well-kept paths, taking in the stories and considering the many mysteries that still to be solved. Near the temple, you may see the ruins of the Jaintiapur monarchs’ old brick palace.

The 600-year-old Nartiang Durga Temple is located in the West Jaintia Hills district of Meghalaya, a state in North-Eastern India. This temple is one of the 51 Shakti Peethas, and it is one of the holiest places in Hinduism for Shaktism worshippers. The indigenous Hindus of Meghalaya’s Jaintia Hills believe that this shrine is Goddess Durga’s permanent residence. During Durga Puja, the temple attracts a great number of pilgrims from all around the country. The Nartiang Devi shrine’s Shakti is known as Jayanti, while the Bhairava is known as Kamadishwar.

The Nartiang Devi Temple is thought to be a Shakti Peetha, or Holy Abode of Parashakti, which is one of Shaktism’s most venerated temples. The Shakti Peethas are based on the mythology of the Daksha yagna and Sati’s self-immolation, in which Shiva carried Sati Devi’s corpse and 51 body pieces fell in the road He had travelled. Each temple contains temples dedicated to both Shakti and her masculine energy counterpart, Kalabhairava. Nartiang Devi’s “Shakti” is referred to as “Jayanti,” while the “Kalabhairava” is referred to as “Kamadishwar.” Sati Devi’s left thigh is thought to have fallen there.