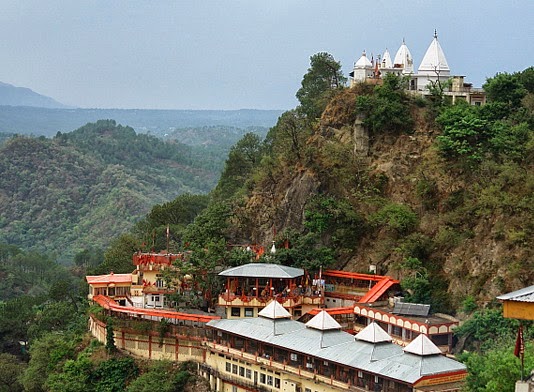 Mata Naina Devi is a town and municipal municipality in the Indian state of Himachal Pradesh’s Bilaspur district.

The Shri Naina Devi Ji Temple is located on a hilltop in the Bilaspur District of Himachal Pradesh, India, near the samadhi of Bhagat Jatt Jeona Morh, who died in the 18th century. National Highway No. 21 connects the temple to the rest of the city. The temple at the summit of the hill is accessible by road (which bends around the hill up to a point) and then concrete stairs (that finally reach the top). There is also a cable car that transports pilgrims from the bottom to the top of the hill.

The Gobind Sagar lake is seen from the Naina Devi hills. The Bhakra-Nangal Dam was responsible for the formation of the lake. The temple’s foundation is the subject of several legends.

Goddess Sati, according to mythology and as recorded in the Veds and Purans, burned herself alive in a Yagna, displeasing Lord Shiva. He placed Sati’s body over his shoulder and began his Tandava dance. All of the gods in heaven were terrified because this may lead to a worldwide catastrophe. Lord Vishnu was prompted to use his Chakra to sever the Sati’s corpse into 51 parts. Goddess Sati’s eyes dropped to the ground at Shri Naina Devi Temple.

Another legend associated with the shrine is that of a Gujjar boy. He was grazing his cattle one day when he noticed a white cow dripping milk from her udders onto a stone. For the next few days, he witnessed the same thing. He saw Goddess in her dreams one night while sleeping, and she told him that the stone was her pindi. Raja Bir Chand was informed about the circumstances and Naina’s dream. When Raja witnessed it unfold in real life, he constructed a shrine on the location and named it Naina’s Temple.

Because the Goddess defeated the demon Mahishasur, Shri Naina Devi Temple is also known as Mahishapeeth. Mahishasur was a strong demon who was granted immortality by Lord Brahma on the condition that he could only be vanquished by an unmarried lady, according to mythology. Mahishasur began to terrorise the Earth and the Gods as a result of this gift. To deal with the demon, all of the Gods pooled their resources and formed a Devi to help them vanquish him. All Gods bestowed various sorts of weaponry on the Devi. When Mahishasur was fascinated by Devi’s great beauty and proposed to her, she accepted. Devi informed him that if he could overcome her, she would marry him.

Devi vanquished the demon and removed both of his eyes during the struggle. This prompted the Gods to joyfully cheer “Jai Naina,” thus the name.

Shri Naina Devi Ji is one of Himachal Pradesh’s most famous places of devotion. It is one of the 51 Shaktipeeths where Sati’s limbs landed on Earth, and it is located in the district of Bilaspur. This sacred site attracts a large number of visitors and devotees throughout the year, but notably during Shravan Ashtami and the Chaitra and Ashwin Navratras.

During Chaitra, Shravan, and Ashwin Navrati, a special fair is held, attracting millions of tourists from Punjab, Haryana, Delhi, Uttar Pradesh, and other parts of the nation.

Shri Naina Devi Ji Temple is located on a hilltop in the Himachal Pradesh district of Bilaspur, which borders the Punjab district of Rupnagar. National Highway No. 21 connects this well-known shrine. Chandigarh International Airport is the closest airport, with Jet Airways and Indian Airlines flights connecting it to New Delhi. The shrine is around 100 kilometres from Chandigarh.

From Anandpur sahib and Kiratpur sahib, there are motorable roads that go to this shrine. These are the locations where taxis may be rented. The distance between Kiratpur Sahib and the shrine is 30 kilometres, with 18 kilometres of that being driven via the hills. The distance from Anandpur Sahib is 20 kilometres, of which 8 kilometres are driven via the hills. People used to trek to the shrine from Kaulan Wala Toba near Anandpur Sahib in the past. State Transport bus services are provided from all of Punjab’s and Himachal Pradesh’s major cities.

Once you reach the Temple Bus Stand, you have the following options to go to the temple:

Ropeway facility is available as per the following timings:

The majority of pilgrims ascend the hill on foot, singing Jai Mata Di. The distance is manageable and can be accomplished in under an hour. Palkis are also available and can be rented if necessary. Toilets and rest areas are offered throughout the route. There are also snacks and cold water available. It is, however, recommended that you carry bottled or mineral water with you. With the aid of the Shri Naina Devi Shrine Board, several new amenities are being built.

Nearest Airport is at Chandigarh at a distance of approximately 100 Kms.

Nearest Railway Station is at Sri Anandpur Sahib at a distance of 20 KMs approximately.