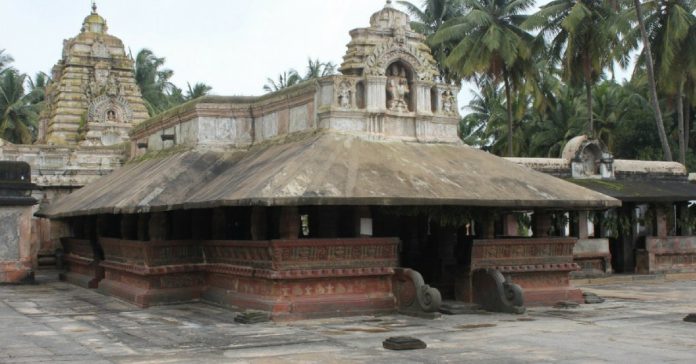 The honey-hued Shiva Lingam inside the shrine gives the Madhukeshwara temple its name. The temple is one of Karnataka’s oldest temples, dating back to the 9th century. Mayura Sharma of the Kadamba dynasty commissioned it.

This was Karnataka’s first royal dynasty. The Chalukya era and the Hoysala period followed the Kadamba kingdom. Both periods of monarchs made additions and renovations to the temple. As a result, the temple serves as an example of how architectural styles in Karnataka have evolved over time.

Sightseeing in and Around

Visitors to the temple are greeted by a pair of stone elephants. The Garba Mandapa, or main shrine, of this temple has a relatively modest structure. In terms of carvings on pillars and walls, it is sparsely ornamented. This shrine houses a honey-colored Shiva Linga. A Sankalpa mandapa was constructed to the temple during the Chalukya dynasty’s rule.

The Madhukeshwara temple is significant both religiously and historically. People travel from all over the country to this temple to celebrate Mahashivratri. If you are travelling Karnataka, you must pay a visit to this temple.

The Hoysala monarchs are credited with building the Nritya mandapa. In terms of adornment, the Nritya Mandapa is a stark contrast to the Garba Mandapa. This mandapa’s ceiling, walls, and pillars are all wonderfully carved. Reflective convex and concave sculptures, one below the other, are a Hoysala signature on the pillars. This demonstrates the skill of the stone carvers of the time.

The Ashtathik Balahas, their consorts, and vahanas have their own shrines in the temple. This is most likely the only temple where this may be seen. An beautifully carved stone cot and a triloka mandapa are two of the temple’s attractions. The Sonde rulers created this. Within the praharam, the cot is located in a separate mandapa. This is composed of granite, which is far more difficult to cut than soft stone.

The cot is made up of ten individual parts. It is utilised for ashtavathama poojas during the Rath yatra festivities. Shiva and Parvathi are depicted in the triloka mandapa, which is surrounded by the Kailasa Sikara, Sesha lok, and Bathala lok.

A vertically sliced Ganesha idol is another remarkable feature of this temple. The remaining half of this stone idol is thought to be in Varanasi.

A 7-foot tall monolithic monument of the Nandi Bull stands inside the Nritya Mandapa. The left eye appears to be pointed towards Lord Shiva, while the right eye appears to be focused towards Parvati. It’s worth noting that the line of sight has been designed in such a way that the pillars don’t cross it.

When the Kadamba dynasty ruled Karnataka, Banavasi was the first capital city. The city was founded in the year 375 AD. Huen Tsang, a Chinese traveler-monk, as well as Ptolemy, Kalidasa, and Chamarasa, a Greco-Roman writer, have all praised it. It has been given several other names over the years, including Konkanapura, Nandanavana, Vanavasika, and so on. The Madhukeshwara temple is the only remaining structure today.

How to Reach Madhukeshwara Temple

At a distance of a little over 250km, Mangalore is the closest airport. Tourists can choose to travel from Mangalore to Banavasi by bus or taxi.

The closest railway station connecting Madhukeshwara Temple is at Shimoga. This is at a distance of 112 km.

The state government organises the yearly cultural event Kadambotsava, which attracts a large crowd. The town features performances such as folk dances, art displays, classical music, and Yakshagana dramas during this festival, which takes place every year in December. Aside from that, festivities such as Navaratri, Mahashivaratri, and Lakshadeepotsava are held here.

The best time to visit  is from December to March. September to January

Quick Facts about the Madhukeshwara Temple