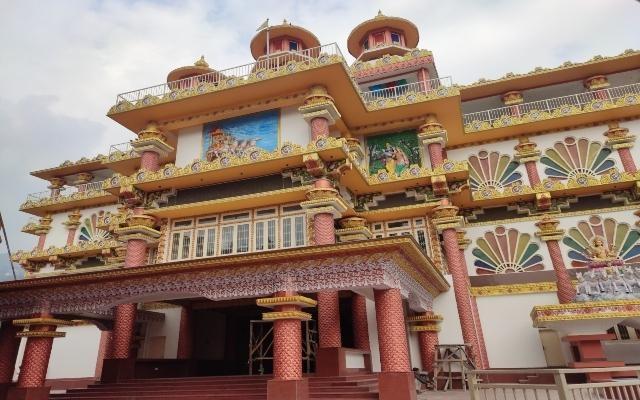 Thakurbari Temple, located on MG Marg in Gangtok, is the city’s most prominent and oldest temple. The temple, which was built in 1935 by Sir Thutop Namgyal, the previous Maharaja of Sikkim, is dedicated to virtually all Hindu gods and goddesses and has become a major gathering place for Gangtok’s Hindu population. The temple complex was renovated in 2011 with the addition of a multi-purpose hall and a library.

The Thakurbari Temple, located in the centre of Gangtok, is proof that the Chogyals, the kings of the ancient country of Sikkim, were religiously tolerant. The temple was built on land granted by a monarch of the Namgyal dynasty in 1935, and it is one of the region’s oldest Hindu temples.

Devotees come from all over the country to visit Thakurbari Temple. This temple is a must-see for anyone visiting Sikkim for its religious monuments and architecture. Thakurbari Temple is home to all of Hinduism’s most significant deities. The building isn’t particularly impressive, but the inner sanctum’s tranquilly stands in stark contrast to the city’s activity.

Take a taxi from MG Marg Market to Tibet Road in the south-east. Take a quick left into Bhanu Path Road and then a left onto NH10. MG Marg is a 10-minute drive from Thakurbari Temple.

Take a trip down to this temple if you want to get a feel for Gangtok city. While it may take a little longer to get there, you will be greeted by a lot of friendly people who will point you in the right direction.

From 6 a.m. until 8 p.m., the temple is open to the public. The ideal time to visit this temple is early in the morning, when the priests are doing their rituals and you can get a peek of Sikkim’s Hindu population.

If you visit this temple in October or November, it’s possible that your visit may coincide with Chhath Puja. At Thakurbari Temple, this ancient Hindu Vedic festival is performed with a lot of zeal. Surya, the Sun God, the god of energy, is said to be the most environmentally friendly of all Hindu celebrations.

Aside from Chhath Puja, Thakurbari Temple has a number of Hindu festivals throughout the year. If you’re lucky, you’ll be present when a light and sound display is put on for pilgrims and travellers.