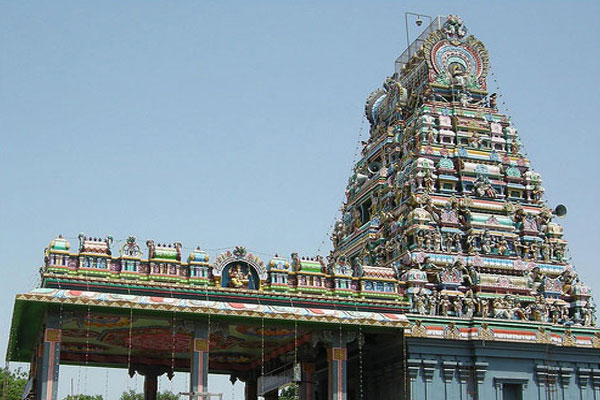 Sri Vetrimalai Murugan Temple is a historic temple dedicated to Lord Muruga located in the centre of Port Blair. The British built the temple on Ross Island in 1926, but it was moved to Port Blair in 1966 when India gained independence. Ponnuranga Mudaliar, a well-known and influential merchant, was the temple’s protector during its early years. The temple also has shrines for Lord Ganpathi, Lord Shiva, and Goddess Parvati in addition to the main shrine.

The Andaman and Nicobar Islands have repeatedly demonstrated that they are not only about islands, sea, water sports, and beaches, but also contain a variety of additional tourist attractions to please and engage a diverse spectrum of visitors. The location offers something for everyone, and most tourists will find it to be one of the most enjoyable holiday locations. Those who believe that the Andaman Islands are nothing more than beaches should be told that this is only a fiction.

The Entrance to the Murugan Temple of Port Blair

This particular set of islands is so adaptable that it has the ability to appeal to religious visitors as well. Yes! That’s correct, the Andaman and Nicobar Islands have a plethora of religious attractions thanks to many religions, including temples, mosques, and churches. The religious history and context of the location give insight into the secular region.

There are several temples, a reasonable number of mosques and churches, and a minor number of Gurudwaras and other religious sites. However, we will reveal some historical facts about a well-known temple that goes back to the days when the Tamil community first came to settle in various areas of the Andaman. The Shri Vetrimalai Murugan Temple, which is located in Shadipur, Port Blair, is a well-known temple. This temple has a rich historical past that many people are unaware of, therefore let us learn more about it.

1. Initially, a shrine to Lord Vinayaka was erected to keep the Tamil administrative staff loyal to the British overlords, but when a member of the staff requested that a temple dedicated to Lord Murugan be built, the siege for Shri Vetrimalai Murugan Temple began in 1926.

2. The Shri Vetrimalai Murugan Temple was built at Ross Island and finished by 1932 in response to a request made by Tamil members of the British administrative staff residing on the British capital headquarters at the time.

3. After India gained independence, the temple was relocated from its original location to Port Blair, since the region’s capital was also relocated to Port Blair, and a huge number of Tamils moved to the present capital of Andaman.

4. At the time of its founding, Mr. Ponnuranga Mudaliar, a famous Tamil merchant, maintained and administered the temple.

5. One of the most interesting facts about the Shri Vetrimalai Murugan Temple is that it was inspired by the famed Kanda Kottam temple in Chennai, Tamil Nadu’s capital.