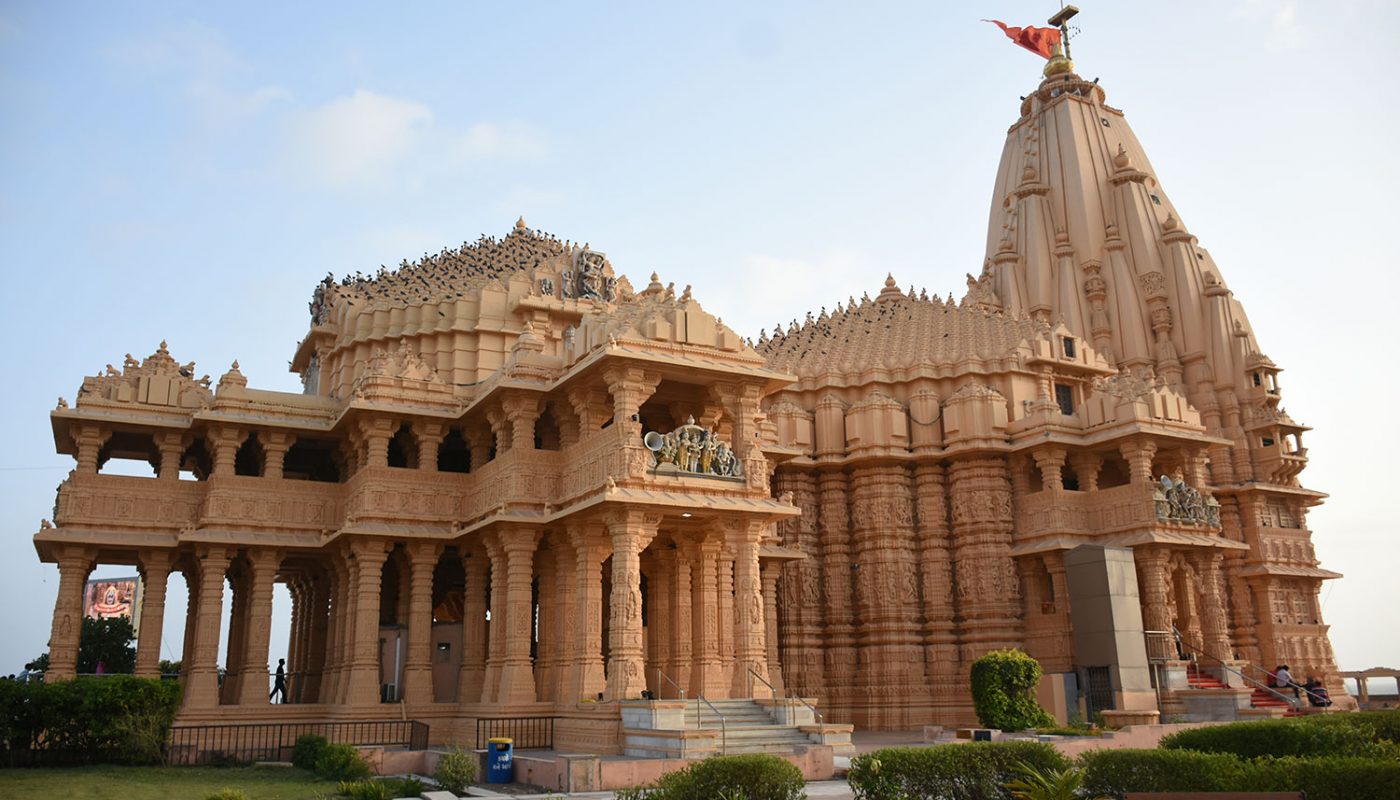 Shree Somnath is the first of India’s twelve Aadi Jyotirlings, and is located in Prabhas Patan near Veraval in Saurashtra on the western coast of Gujarat. It is strategically located on India’s western coast.

Moon was cursed by the enraged Daksha, and its brightness was taken away. Moon landed at the Prabhas Teerth on the advice of Prajapita Brahma and worshipped Bhagvan Shiva. Moon was blessed and freed from the curse of darkness by Bhagvan Shiva, who was pleased with his great penance and devotion. Moon is said to have created a golden temple, followed by Ravana’s silver temple, then Bhagvan Shree Krishna is said to have built Somnath temple out of Sandalwood.

Because it is a Triveni sangam (the confluence of three rivers – Kapila, Hiran, and Sarasvati), Somnath has been a pilgrimage site since ancient times.

Despite being sacked by foreign invaders multiple times, the temple is still standing and is the outstanding example of Chaulukya architecture.

Several desecrations by Muslim conquerors between the eleventh and eighteenth centuries A.D. are recorded in later records of history. Every time the temple was renovated, the people’s reconstructive spirit was present. Sardar Patel, who saw the ruins of Somnath temple on November 13, 1947, was determined to rebuild the current temple. On May 11, 1951, the then-President of India, Dr. Rajendra Prasad, performed the Pran-Pratistha at the present temple.

How to Reach  somnath temple :-

Somnath’s nearest airport is in Diu, which is roughly 65 kilometres distant. It’s not a normal commercial airport, but rather a civilian airfield that serves the state’s neighbouring districts, including Veraval and Jafrabad. Regular taxis and commuter buses are available to transport you to Somnath. In addition, Ahmedabad’s Sardar Vallabhai Patel Airport is the nearest international airport.

Somnath is well-connected to adjacent cities by bus, with a variety of options. There are luxury buses, non-AC buses, and AC buses to choose from, depending on your budget. Buses from Diu to Somnath are air-conditioned and cost less than INR 500 per passenger. In addition, regular private buses run on a daily basis from cities like Rajkot, Porbandar and Ahmedabad.

The nearest railway station to Somnath is Veraval Railway Station, which is only 5 kilometres away. This station has excellent connections to major Indian cities such as Mumbai and Ahmedabad. On a daily basis, a number of trains travel these routes. To get to Somnath, rent a taxi or cab from the railway station.

Duringpeak seasons and prime Hindu festivals like Shivaratri, Naag Panchami and Shravani mahotsav (celebrated in the Hindu month of Shravana), a number of devotees visit Somnath from all parts of the country to seek Lord Shiva’s blessings. To reach this gorgeous and renowned temple in Gujarat, options are galore. Pick the one that suits you the best.

Thousands of devotees travel from all over the country to Somnath to seek Lord Shiva’s blessings during peak seasons and major Hindu festivals such as Shivaratri, Naag Panchami, and Shravani mahotsav (observed in the Hindu month of Shravana). There are numerous ways to get to this beautiful and well-known temple in Gujarat. Choose the option that best fits your needs.

The Somnath Temple is located near Veraval in Saurashtra on Gujarat’s western coast.