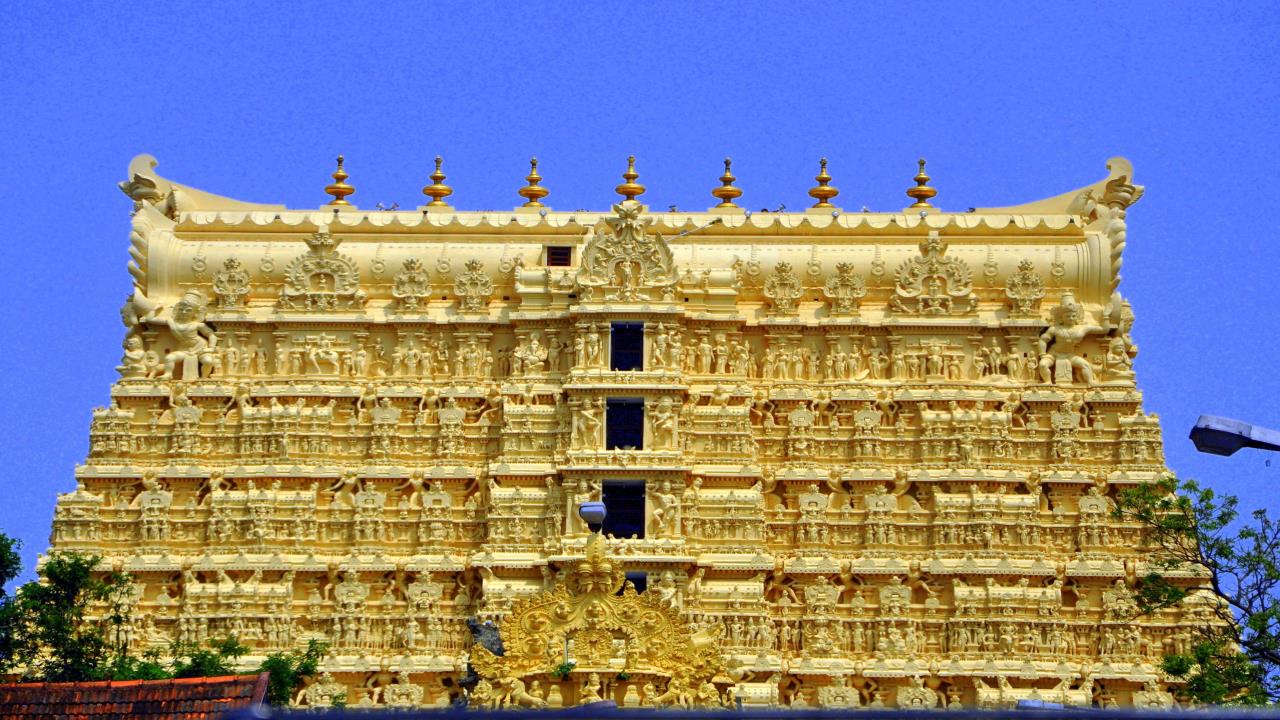 Padmanabhaswamy Temple is the mother of all supernatural locations and is located in Kerala. Of course, it is a haven of sanctity and divinity par excellence, but the temple’s underbelly houses a mysterious chamber with a dark background.

The Padmanabhaswamy temple is a Hindu temple in Thiruvananthapuram, Kerala, India’s state capital. Thiruvananthapuram translates to “The City of Lord Ananta” (The City of Lord Vishnu) in Malayalam, alluding to the deity of the Padmanabhaswamy temple. The temple is constructed in a complicated mix of Chera and Dravidian architectural styles, with towering walls and a 16th-century gopura. While the Ananthapura temple in Kumbla, Kasaragod, is regarded the deity’s original seat (“Moolasthanam”), it is architecturally similar to the Adikesava Perumal temple in Thiruvattar to some extent.

On the infinite serpent Adi Shesha, the primary god Padmanabhaswamy (Vishnu) is placed in the “Anantha Shayana” pose, the perpetual yogic sleep. Padmanabhaswamy is the Travancore royal family’s tutelary deity. The temple’s trustee is Moolam Thirunal Rama Varma, the titular Maharaja of Travancore.

The Padmanabhaswamy temple is a well-preserved antiquity that was built as a duplicate of Thiruvattar’s Adikesavaperumal Temple. Despite the fact that the origins of this temple are unknown, worshipers believe it has existed since the beginning of the Kali Yuga, which was 5000 years ago. The Bhagwad Gita also mentions the Padmanabhaswamy temple. Balarama, Lord Krishna’s older brother, is said to have visited the temple, bathed in the Padmatheertham, and presented various offerings to the deity.

With that in mind, we set out to learn more about this old temple, which is mentioned in holy scripture and has been lauded by holy men who walked the Indian soil long ago. The Padmanabhaswamy Temple and its history will undoubtedly shock you.

1. The shrine is one of the most cherished abodes of Hindu god Maha Vishnu, because the God resides in Anantha Shaiya (in a reclining position on the huge snake Shesha) with a lotus attached to the Lord’s belly by its stem, and Lord Bramha sits on the divine flower. Two of Sri Vishnu’s consorts, Sri Devi and Bhu Devi, are also present in the sanctum sanctorum, which is a rare sight.

2. The temple was established in the 6th century A.D. and then embellished by the Kings of Travancore over a period of ten centuries. The Travancore royal family is thought to be descended from the venerated saint Kulashekhara Alwar. The temple is almost identical to Thiruvattar’s famed Sri Adikesavaperumal Temple.

5. It took a lot of toil and effort to uncover the secret vaults, but what they showed was incredible: bags full of ancient gold coins, diamonds, gemstones, and massive gold and diamond necklaces.

6. Despite the committee’s best efforts, the portals to Vault B remained sealed. The Bharatakkon Kallara or Chamber B is thought to be the most connected to God Padmanabhaswamy among the six vaults.

7. According to the ruling family, temple priests, and Vedic academics, any attempt to open the vaults will bring catastrophe. Sundarajan, the petitioner, died unexpectedly a month after the doors were opened, strengthening this idea. As a result of the curse, another observer’s mother died.

8. Legend has it that in the 1930s, when a band of temple invaders attempted to steal the contents of Vault B, they were thwarted by enormous and venomous snakes that appeared out of nowhere.

9. What is it about chamber B that makes it impenetrable? During the reign of King Marthanda Varma, high-ranking sages sealed the gates with Naga Paasam mantras (serpent noose).

10. Only a high-calibre sage or saint is capable of eradicating the Naga Paasam by properly chanting the Garuda mantra.